Come spend your holiday at Le Paradis Campsite by Talmont-Saint-Hilaire. You will enjoy an exceptional setting near the beautiful Veillon beach. 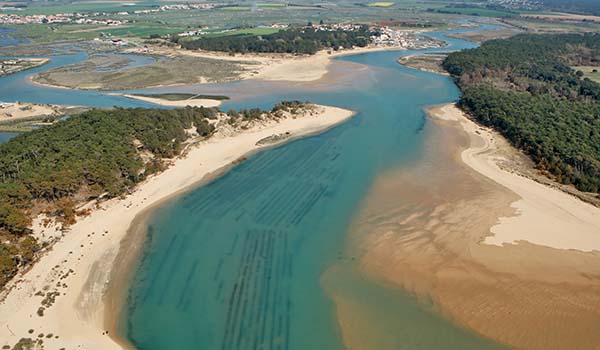 Talmont-Saint-Hilaire has sixteen kilometers of exceptional coastline that alternate between cliffs, sand beaches, pebble beaches, and an emerald estuary that extends into a maze of channels and marshes. The town is bordered by the Bois du Veillon, one of the most beautiful forests of holly oak in on the Atlantic. The nature here is generous and preserved. The Payré estuary is labeled a Grand ensemble naturel and was given the title premier site remarquable of the Vendée in 2007. It was also made a zone de protection natura 2000 for its unique biodiversity with many rare and protected plant species. Veillon beach was awarded the Pavillon Bleu label in 2014 for its water quality.

The Talmont-Saint-Hilaire castle overlooks the pretty town and can be visited all year round. It is one of the most visited sites on the coast. You can see the “The Falcons of Aliénor” falconry show during the summer, which alternates with the horse show “The Epic of Richard Lionheart” at this treasure of regional history. With evening shows and medieval festivals, the castle receives up to 5000 visitors per day in high season. The “Chills at the Castle” and “Panic and the Castle” events take place in October, drawing larger crowds every year.

You can find out more about which cookies we are using or switch them off in settings.

To help us better understand how our website is used, we work with Google Analytics.

We use Tawk To's third-party cookies to give you the opportunity to chat directly with us via a chatbox.